Both founders are commencing with the experimental activity.

The demand for tests also in the residue area has increased to such an extent that further employees are hired.

Relocation to a larger testing facility to Wunstorf Liethe (Leinechaussee).

GLP-certification for the execution of residue tests.

Change of the corporate form: Continuation of Field Research Support as sole proprietorship by Helmut Zöllner.

The polish branch begins its operation.

GEP-approval by the Polish authorities.

FRS is partner of Deutsche Landwirtschaftsgesellschaft (DLG) e. V. at the „DLG-Feldtage 2010“ and at „Potato Europe 2010“ in Bockerode.

New regulations in regard to the land usage require a relocation of the trial facility: The new site is also located in Wunstorf-Luthe, about one kilometer away in Potts Kamp.

The construction of a new test facility is planned in order to optimise work processes and improve the working environment for employees.

Start of construction of the new building in the Max-Planck-Straße 5 in Wunstorf.

FRS is again partner of DLG for the execution of „Potato Europe 2014“ in Bockerode.

Move into the finished offices and laboratories in February.

GLP-certification of the Polish subsidiary on the performance of residue tests.

FRS again partners with DLG in the realisation of „Potato Europe 2018“ in Bockerode. 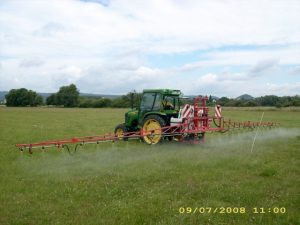